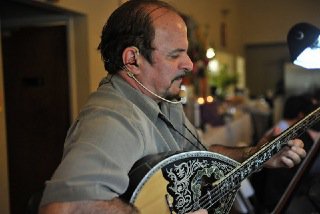 Andreas was born in Athens, Greece. He became a professional guitarist in 1974. He came to the US in 1977 and has played with various groups across Canada and the US. For the last fifteen years, he has been a bouzouki player acting as lead musician for Goldfingers Greek Restaurant in Dallas, Texas.

Laura-Anna has been performing most of her life. She is both a singer and a dancer, and has been entertaining people all over Texas and Louisiana for many years. She has been a belly dancer as well as instructor.